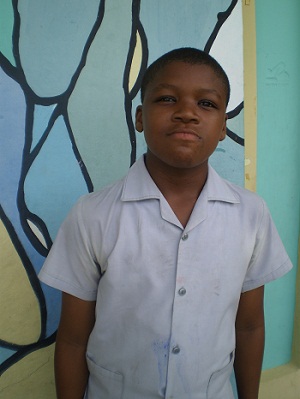 The next Van Goh?

Javaughn Williams, 11 years old, is a testament to the Centre’s motto of ‘unlocking potential…transforming lives’. He started attending the Greater Portmore Junior Centre approximately two years ago, and according to his grandparents, has shown an improvement in his school work, in his behaviour and in his socializing ability.

Javaughn is a special education student, who is also said to have Attention Deficit Hyperactivity Disorder (ADHD). Prior to coming to the Centre, he was more reserved than he is now, and has settled down a bit. He has made new friends, and is fully involved in his Art, Craft, Sign Language, Reading, and Papermaking classes. His grandfather, Mr. Williams, notes that he is “more interested in his books and wants to learn”. His grandmother, Mrs. Joylyn Williams, is amazed at what he has retained as he teaches her some of what he has learnt in Sign Language class. His consistent attendance to the Reading class has enhanced his capability.

Before coming to the Centre, Javaughn had always loved and practiced art. He has now fine-tuned this skill. In 2009, he was awarded a medal for being the Child of the Year in the Art activity. When asked what he would like to be when he is older, without missing a beat he replied, “an artist and a fireman”. With loving support from his family and friends and conscientious effort on his part, Javaughn can be just that.