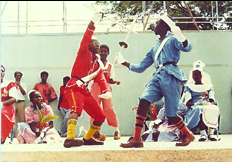 The ‘bruckins’ dance; image taken from, “Bruckins in Jamaica,” written by the African Caribbean Institute of Jamaica (ACIJ).

Bruckins is a celebration marrying dancing, singing, speech making, feasting and friendly rivalry that originated as an event held to mark the anniversary of the emancipation of slaves. Traditionally the celebration started 31st of July and continued to the early hours of 1st of August so the revelers could, ‘bring in the August morning.’

The official performance of bruckins was said to occur in 1966 where it was performed in public as part of the Jamaica Festival of Arts.

Bruckins is a mixture of the European and African influences, part of it an imitation of English royal pageantry, the rest is African in style and execution. The dance makes use of long, gliding steps (similar to a European court dance) along with forward and backward movements of the body and other dance expressions that are African derived. The performers consist of two rival sets, the Red and the Blue, wearing costumes in imitation of a royal court, the colours probably derived from an older tradition, the red and blue set girls. Each set of dancers is led by a King and Queen and accompanied by attendants such ad Queen Granddaughter, princesses, captains, soldiers, soldiers, each wearing appropriate head wear and carrying a sword or scepter.

Also for more information you may contact the African Caribbean Institute of Jamaica (ACIJ).